Molecular sieves for the dehydration of ethanol 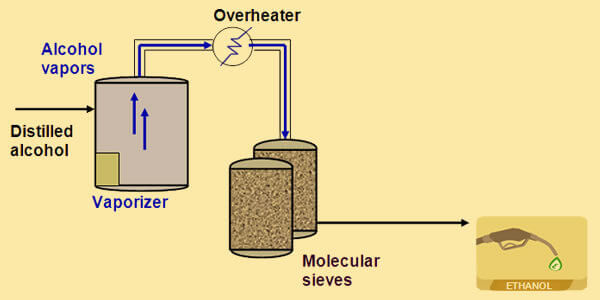 Molecular sieve desiccants are effective adsorbents for gases and liquids. Molecular sieves can be considered as a filter used to separate molecules from each other.  The type 3a molecular sieve is a mesh-like substance which does not permit molecules of diameter larger than 3A to enter. They have higher efficiency and longer lifetime compared to other molecular sieves.

The molecular sieve 3A plays an effective role in the ethanol dehydration process. Due to the azeotropic property of ethanol during normal distillation, ethanol concentration is restricted to around 95%. Molecular sieve 3A is employed to filter out the water molecules, which have a diameter of approximately 2.8A, from the ethanol molecules, with a diameter larger than 3A (approx. 4.4A) and thus produce pure dry ethanol. The foundation for this process is the concept of adsorption of water molecules from the ethanol-water mixture.

As stated above, the Ethanol dehydration process can be simplified by the use of molecular sieve 3A beads. The ethanol-water mixture is allowed to pass through a bed of 3A sieve beads under high pressure, thus activating the molecular sieves. By activating molecular sieves, the water molecules from the mixture get adsorbed and the dry ethanol molecules shall pass the sieve bed. These ethanol molecules, which are anhydrous, will be condensed outside the 3A sieve bed and can be collected separately. This is an exothermic process and the heat emitted during the adsorption can be used to regenerate the 3A sieve beads, which allows this dehydration process to consume less energy compared to other techniques.

The high regeneration ability of the molecular 3A sieves allows the reuse of the same. The sieve beds grow saturated as more water molecules get adsorbed. Water is removed and thus the sieves are purged, by applying vacuum. Hence the 3A sieves undergo a sequence of adsorption and desorption during this process.

Molecular sieves 3A have faster adsorption speed and so the entire process of ethanol dehydration, is more efficient. The use of molecular sieves 3A beads is more accurate when combined along with the conventional distillation. The concentration of ethanol is increased to around 99% (from 95%) when both the processes are combined. As the 3A sieve beads are pollution resistance and can be stored at room temperature, the process is more environment-friendly and economical too.