Use Molecular Sieve for Ethanol Drying 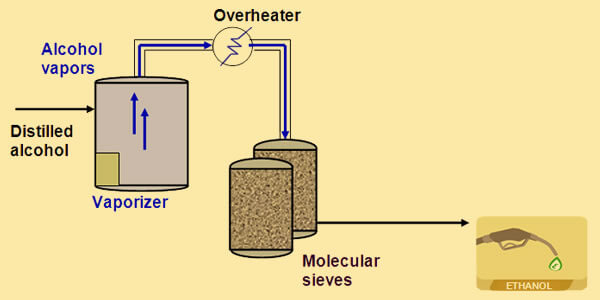 Another important use is as a solvent for the synthesis of drugs, sterilizing products, etc. Today, many European countries are also using a 10-15% blend of anhydrous ethanol in petroleum. Thus, the importance of dehydration or drying out of ethanol to completely remove any presence of moisture increases significantly.

Molecular Sieve Dehydration and its Advantages

The molecular sieve dehydration technology utilizes the adsorption phenomenon, and this is used to produce anhydrous ethanol. The technology was first used in ethanol drying in the early eighties and has since gained significant popularity. These Molecular Sieves for Ethanol drying are made of popular materials called zeolites (chemically known as aluminosilicates as well). The industrial process essentially involved passing the vapor form of ethanol through a column of the molecular sieve, which separates any water present in the vapor form from the ethanol by trapping its molecules onto its surface while allowing molecules of ethanol to pass through. Two different subzones of operation are provided within a master transfer zone so that the two liquids part ways without any further interaction. Thus, the ‘drying out’ of ethanol is achieved.

Ethanol drying with the help of molecular sieve technology has become the most attractive option for industries due to some very compelling reasons. By reducing the energy requirements in comparison to other methods like azeotropic distillation, extractive distillation or membrane separation, the operating cost has been significantly reduced. This process also does not use any other chemical, hence eliminating the chance of contaminating ethanol with any other substance completely. The cost of the usage of such chemicals is also thus automatically eliminated altogether. This in turn also translates into higher alcohol recovery from the process, thus leading to greater revenue for the industry.

Ethanol produced from the hydration of ethylene by the petrochemical industry has several crucial industrial and commercial uses. This stems from its solvent properties, and hence the purity of ethanol is critical, for which it is often dried. Molecular sieves for ethanol drying are gaining popularity across the industry. This is so because Molecular Sieve Technology offers cost advantages and higher alcohol recovery rates.